Ok.. so.. it was only a matter of time right?! Rockband addiction -> drum addiction?
Sounds good to me.

So I have decided to give drumming a shot. With the aid of my friend Dave and his ultra shinny drums (sorry.. drooling...) he has been attempting to teach me the basics of drumming. I have only had about a single days worth of real training on these crazy things so I have a loooooong way to go but here is a video of my first shot at it. I am looking away because I would mess up every time I looked at the camera. (although I did manage to mess up plenty of times when I didn't have an excuse ) :)


edit: I know the video has issues playing... Appearently it is a known issue and Blogger is "working on the problem" so when the link isn't being stupid I will take this note down. It works sometimes.

UPDATE: As of 2/24 the videos seem to be working again. Give it a shot.

I have no musical background whatsoever besides about a month and a half of playing drums on Guitar Hero so there is a lot for me to learn. I am pretty good at blindingly following directions on a tv screen with little colored dots floating by but have never tried just playing along with something. Plus, my left foot has always just been allowed to be lazy while my right foot does all the work in GH, now there is this funny thing called a hi-hat pedal for my foot to deal with. Just some of the fun things of starting to learn something new.

I am having a lot of fun though so I am looking forward to learning more and improving as time goes on.
Posted by Kristen at 8:38 PM No comments: 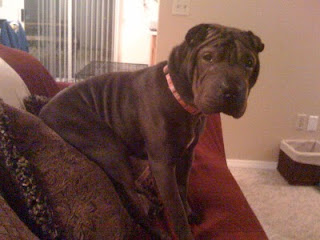 Teaching the dog all my bad habits...

If she starts forgetting her chores and leaving things around the house we're in trouble.

How to fix a Guitar Hero Drum Controller 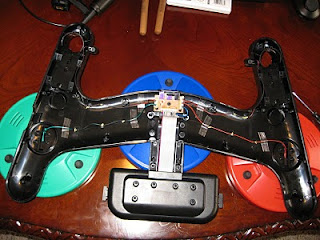 So, much to my surprise the problem was as expected. A bad wire. Last night I noticed I was missing a ton of red notes (I don't suck *THAT* bad :P) and thought it would either be one of two things: a loose/broken wire or a broken transducer.

I pulled the thing off the stand and disconnected the cymbal pads, Wiimote, and anything else that would come off. Fortunately, the screws that hold this thing together are simple Phillips head and besides there being a zillion of them there was nothing else holding the case together (don't forget the screws under the little adhesive no-skid pads on the feet )(the feet you would use if you wanted to play it on a table instead of a stand). The pic above shows the rather sparse interior of the drum controller.

This is where I found the answer to my questions... As soon as I started inspecting the wiring to the red pad the wire just fell apart. Easy enough to fix. Kind of a pain to get to. 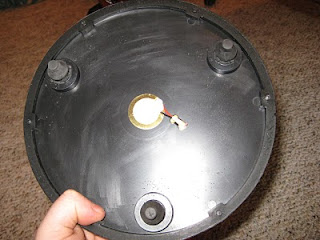 To remove the pad from the rest of the assembly, take the 4 screws holding the red (or whatever color pad your trying to fix) housing onto the frame out. Now you have the pad free (or dangling by the wire if it is still attached at all) but now you have to get the silicon pad off the hard plastic case. There are three "one way" grommets (I guess you could call them) holding the two pieces together. I used a small screwdriver to gently shove the edges of the wedge shaped plug/grommet/thingies through the hard plastic holes. Patience is important here. After you have the pad free it is a pretty simple setup. Two wires. From the factory there is some goop covering the solder contacts and the wires to try and keep them secure. I used a pair of pliers to pull up (do it gently!) the old wire from the goop. I then de-soldered the little remaining wire-stub.

All you need to do now is solder some new wire to the sensor. take note of the original wire positions to maintain polarity (I didn't check to see if polarity was an issue but I try to put things back the way I found them). I made my wire pigtail fairly long compared to the old one. It gave me more room to work with when putting it back together. Fish the new wire pigtail back through the hole in the red pad case and then back through the hole in the drum stand. Then solder the new wires to the ones left inside the case (alternatively, you could replace the whole length of wire and put the connector on the other end and plug it back into the board but that is kind of overkill.) 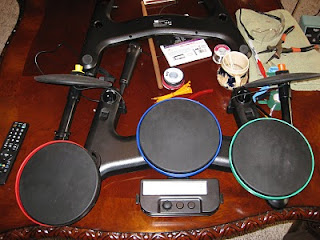 k in until after I tested it to make sure my fix worked. (I didn't want to have to pry them out again). I carefully flipped the whole thing over (notice in the pic the pad still isn't attached to the red hard plastic case), I plugged the cymbals and wiimote back in, and did a quick functional test to make sure everything is working.

Once I was happy with the results I unplugged everything again and flipped it back over and started putting the pad and case back together. I used a little bit of heat shrink tubing to pretty up my splices. It goes together the same way it comes apart so I won't discuss that process.

Soo.. *cough* I broke one of my Guitar Hero drums... I do admit that I am fairly hard on them but come on! It is supposed to handle the abuse of kids/adults (and me) of all ages and I have only had them about 2 months (ok.. 2 months of me abusing them = probably a year of normal use).

Too late tonight but I will be doing some surgery on them sometime when I get off work tomorrow. I am hoping it is just a loose wire. It is the red (snare) pad though which seems to get the most abuse. I am not sure where to find spare parts for it if I broke it. O_o 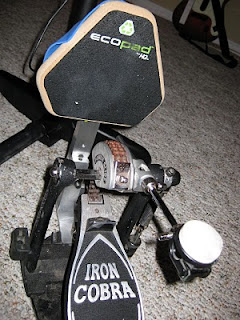 This is my latest setup for the Guitar Hero drum kit mod. I made an aluminum bracket to hold a small drum practice pad with the transducer mounted behind it. I added some foam to reduce vibration. It just clamps to the kick pedal and seems to work pretty well. (need to do something about that rusty chain sometime *eh*).
Posted by Kristen at 9:48 PM No comments: 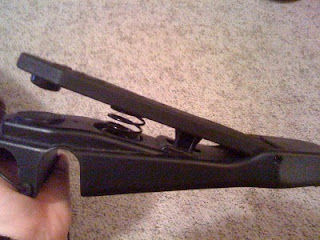 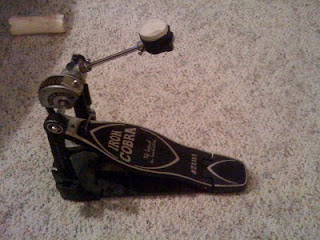 People who know me have noticed my obsession as of late with Guitar Hero / Rockband... (probably ended up that way due to my lack of *real* musical talent). Drums being my favorite mode of annoying people, I got to be rather annoyed with the stock pedal that came with the drum set. It isn't too bad but it isn't very responsive when you get really complicated stuff thrown at you. Plus, I can't seem to leave stuff alone. I have to find some excuse to take things apart and "fix" them.. *cough*..

Anyways, this isn't a new idea (in fact I saw someone else do this on the internet and pretty much went "cool.. I could do that..") I found a used in-expensive pedal at a cool music shop Portland today an 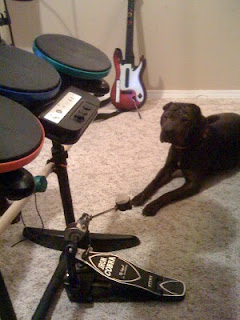 d took a screwdriver to my old pedal and swiped the transducer out of it. That is pretty much it. To determine how well it was going to work I grabbed a couple things I had lying around plus some electrical tape and zip ties (yeah I know, real professional) and stuck the transducer up to something I could hit. I played a few songs with it and with the exception of being rather loud and thumpy due to how I have it mounted it works really well. I plan on coming up with a more elegant (and quieter) mounting for it. Probably as soon as I get tired of hearing it in its current setup. 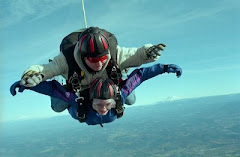